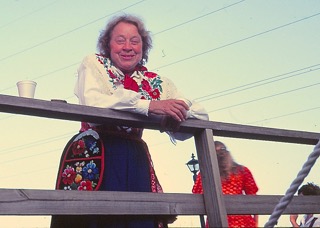 Farwell’s personal costumes make up the bulk of the collection. She wore folk dresses frequently and had favorite costumes that reflected her career in folk dance instruction, her time in Germany, and her trips around the world.  Farwell’s start in folk dancing came by chance during a work study in the fall of 1937 in New York City, at Hartley House.

"I accidentally got in with this folk dance group, and that was my downfall—that was the beginning of the end. That was the last six months that I was in New York. And there weren’t enough nights in the week to go folk dancing with some ethnic group. See, that was before folk dancing was a general recreational thing. It was back when ethnic groups were still coming in, and sticking together, and trying to keep their own culture alive. And this wonderful man—he was a Norwegian—was single, and took this poor little country girl, swept her up in his arms, taught her the hambo the first night, and from then on he took me to the Danish group, to the Swedish group, the Norwegian group, because he was the head of all of these Scandinavian groups, because he knew how to teach. And I don’t know whatever happened to him. He was a wonderful man. He really got me excited about folk dancing. And then I met [Michael Herman]. ... He was the first man to teach folk dancing in general, all the different country dances, to the general public. And I was one of his most ardent admirers. I was there every Tuesday night. And after the dancing, we’d go around the corner to the little Russian bards, and inns, and so on, and as soon as Michael came in with his cortege of dancers, they’d start playing all of his dances. It was an absolutely fantastic time in my life. And it sold me so on what folk dancing did to people, that I knew that it would be a part of my life forever. So here I am."

Some of the most delicate and fragile costumes in the collection were gathered by Mary Ann Herman, who, along with her husband, was one of the most important and influential members of the international folk dance movement. These items were either collected from their countries of origin or made for dance shows and performances.

Eventually, they were donated to Folklore Village by Karin Gottier. How exactly they passed from one hand to another is not entirely clear from the records at Folklore Village, but the close connections between folk dance instructors frequently resulted in shared costumes and collections. The Hermans were known to have wanted their costumes to be used for dance, so perhaps Gottier thought that Folklore Village would continue with this legacy.

"They’re elderly now—they’re elderly as I am (laughs). But there’s a deep friendship because at the time that we formed our folk dance groups we were all about the same age, and there was a great deal of emotional attachment, all of us, for each other. And I remember when we got invited to New York, by the Hermans, we were still sewing costumes, and putting hems in petticoats, on the way to New York in the car."

Jane Farwell and Beatrice (Bea) Lever traveled together to Folk Dance events and courses in the 1950s and often purchased costumes in their travels. Lever left her collection to Folklore Village, and the items in the collection help tell the story of the friendships made between dancers and instructors. A number of her dresses are very similar to Farwell’s and may have been purchased together.

Other costumes came to Folklore Village because of the connections that were formed over the years of dancing and teaching together. Mary Barthelemy was a very active community member while living in Wisconsin and continued contact with Folklore Village after moving away from the state. Barthelemy traveled extensively as a young woman and donated several items to Folklore Village when she moved to Norway. From Norway, she helped source raw materials, garments, patterns, and reference materials for Folklore Village costumes.

Folklore Village holds a large collection of reference materials (books, pamphlets, and magazines) about the costumes and the ways they would have been used in a historic context. As Farwell made friends and connections, she also inspired people to make costumes to wear to the events and performances held at Folklore Village. They relied on the global network of makers and community members’ pieces to model their costumes after. Folklore Village’s archives hold several postcards and images that were used as reference photos for new costumes. Some of them were sent by friends of Farwell or by Farwell herself while traveling, but also reveal the network of people who helped build and maintain the collections. 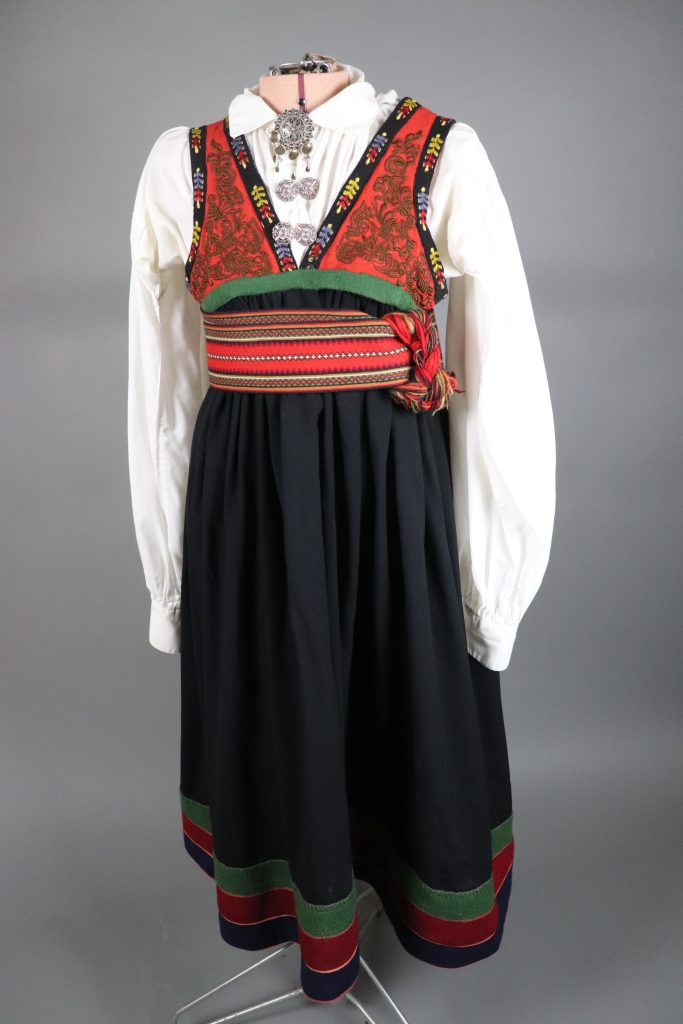 Sometimes people helped Folklore Village acquire a costume because they thought that that region or country needed to be represented. Jane reports that after a show, “Some of the ladies from Saint Paul had on their bunads. And this one lady who seemed to be the head of it seemed to be quite shocked that we didn’t have an East Telemark bunad. And so… when we came home, we came with this bunad which is the “basic” (model) for the East Telemark. We finally managed to pay for weaving the scarf that goes around the middle. But we do not have the right blouse, which is solid embroidery, nor the right apron, which is solid embroidery. Eventually, maybe somebody will help us out with that….”

Some community members like mother and daughter Bimsy Kirkpatrick and Doann Kirkpatrick Holzman made Norwegian costumes to wear to Folklore Village events, but also to show their own ethnic identity. They purchased kits to make together, learning about the traditional process of making and wearing a bunad. At the same time, these garments are deeply linked with their experiences at Folklore Village. The act of making and using the costumes links these women’s individual, nationalized identities with the ongoing practices at Folklore Village and their identities with that community.

Eventually, many of these costumes found their way to Folklore Village. Doug and Helle Clark donated their Danish costumes, pictured below. Bimsy’s Norwegian Voss bunad was donated by her daughter and son-in-law after her death, who both remain active in the Folklore Village community. These costumes and the many others donated to the collection demonstrate the bonds of the community and the desire to see its activities continue.

What is a Folk Costume?