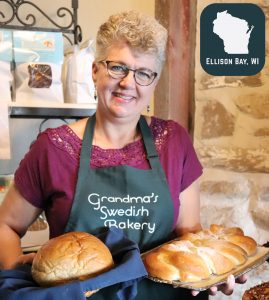 Jewel Peterson Ouradnik of Ellison Bay, Wisconsin, is the eleventh child in a family of twelve kids with deep roots in Door County. She grew up in Sister Bay where her father worked at the lumberyard while her mother ran their small home farm. Her mother’s side of the family have been in Door County “pretty much forever, as far as [she] know[s].” Most of her father’s side have been in Door County for years as well, aside from Jewel’s grandmother who immigrated from Sweden around 1900 and moved to Door County after getting married. Her grandmother was one of many Swedes to immigrate to Wisconsin and the Upper Midwest, making a home on land already inhabited by Indigenous peoples and other immigrants. These immigrants adapted to their new home through actions large and small, creating meaning in their day-to-day interactions, practices, and habits.

Food is at the center of many daily routines and holiday traditions. The ways that immigrants learned new recipes from friends and neighbors while adapting and sharing their own speaks to the flexibility and resilience not only of the practitioners, but of the foodways themselves. This flexibility means recipes can be modified–to feed a bigger crowd, be more efficient, or to make use of the limited ingredients at hand. A baker’s particular way of measuring flour or testing the oven may be connected to specific memories or people whom they learned the recipe from. Often these actions have a practical use, others may simply be continuing quirks from generations before. But the reason is irrelevant. Each action is a mark of a baker’s style–resulting from a combination of practice, learned techniques, and individual choice. For Jewel, her love of family and their traditions is performed by preparing her mother’s recipes and sharing them with others.

OFF THE BEATEN PATH

Jewel’s parents hadn’t planned to open a bakery when they bought Rowley’s Bay Resort in the 1970s. Far from a highway and off the beaten path, previous owners had struggled to keep the resort in business. Jewel jokes that because they’re not on the highway, “You’re either looking for us, or you’re lost.” When Jewel’s family first moved in, they lived in a house on the property and ran a small restaurant, serving their meals buffet-style.

From the start, Jewel’s mother made everything from scratch–even the bread. People started asking if they could buy more rolls from the buffet-counter to take with them, so eventually they opened a small bakery counter. As Jewel says,

We didn’t really plan to have a bakery, but mom always made her own stuff–we didn’t like buy Wonder Bread. We made the homemade Swedish limpa, we made at the time other breads: oatmeal raisin and some of the other types of breads. Right now we just make the Swedish limpa, which is our most popular. And that’s a rye bread made with caraway and anise seed and orange marmalade, so it’s a delicious rye bread.

Today, Grandma’s Swedish Bakery serves many of the same recipes, including Swedish limpa bread, but also a number of sweets like cardamom coffee cake, cinnamon rolls, and their famous half-pound pecan rolls.

These sweets, which are also their best-sellers, are a key ingredient for another popular treat,

And the other thing that we make with these three products–the pecan rolls, cinnamon rolls, and cardamom coffee cake–is what we call Swedish skorpa, which means ‘dry bread’. We didn’t really plan to ever sell skorpa. Mom would take the day old rolls, slice them, sprinkle them with cinnamon sugar, and put them in the oven overnight, and they would be toasty. And then in the morning we would dunk them in our coffee, and then we would eat the day-old stuff. She’d put out a basket and people would start nibbling on it and say, “Can we buy some of this?” So we have to make more pecan and cinnamon rolls, and cardamom coffee cake, so that we have the day-old, so we can make the skorpa. So it’s twice-baked, similar to biscotti.

Jewel’s grandmother brought some of these recipes with her from Sweden around 1900, but Jewel and her siblings learned to bake from their mother.

Almost everything is a show and tell sort of process. Mom would show us, then she'd watch us, and then she would let us. So it was kind of one of those things where, "Ok, I'm watching to see that you're doing that right, and then I'll let you do it."

The recipes used at the bakery remain rooted in family tradition–even the cherries used in pies and bars come from a nearby orchard that once belonged to Jewel’s grandfather, now run by her cousin. Jewel recalls learning some basic tips as a child, like being sure to scrape the butter off the bowl’s edge to ensure cookies were properly mixed. She remembers that yeast doughs were particularly tricky to learn– how to handle them and still ensure a good rise. Jewel takes care to be sure that the bakery stays true to the recipes that Jewel’s mother used, just making the pastries in bigger batches. Sizing up or trying new recipes sometimes takes a little trial and error, and Jewel notes that a small change can make a big difference. One change they recently made was pre-baking the bottom crust on their cherry pie bars before adding the filling, ensuring an even crunchier crust.

Some of their recipes require special techniques at different stages. In this video, Jewel demonstrates how to braid the dough for cardamom coffeecake before it goes in the oven.

The sweet dough they use to make their cinnamon rolls, pecan rolls, and cardamom coffeecake is usually chilled overnight, making it less sticky and easier to handle–which is especially key when rolling out the dough and shaping the buns and loaves.

Because it is a seasonal business open in the summers, new employees are regularly coming through and learning the recipes. Jewel especially loves teaching the pecan rolls–to get them just right requires attention to a particular detail.

You have to get the caramel to a certain stage. It’s kind of like cooking candy on the stove, you have to pull the rolls back to see that it’s bubbling a certain way, you know what I’m saying? A certain smackle to it so that we know that it actually is done.

In this video, Jewel demonstrates how to roll it out for pecan rolls and the steps involved to combine the caramel and pecans. These skills with the dough are ones she remembers learning from her mom.

By continuing to use the recipes she learned from her mother in the bakery, Jewel is both maintaining and sharing her family’s traditions. Seasonal employees learn the process when they start working and visitors might learn from a copy of their cookbook, “Grandma’s Home Kitchen.” Even as the recipes get doubled, tripled, and quadrupled, the significance and meaning for Jewel remains rooted in memories of time spent in the kitchen with her mother and siblings. As Jewel says, making the recipes in the bakery “is just like you do at home, just in larger quantities.” Their homestyle touch is a tradition the bakery and resort take pride in, continuing to make all of the recipes from scratch. Many guests come back year after year for family reunions and other occasions and Jewel enjoys sharing her family’s foods and traditions with them.

Baking is a means of connection for Jewel. To her mother’s memory, to the guests that visit the bakery, to her family’s roots in Door County, and to her Swedish-American heritage. As Jewel expands and adapts the recipes to feed the bakery’s frequent crowds, she offers a clear example of how foodways traditions can be modified to fill present needs while still maintaining a connection to past bakes, practitioners, and a heritage being sustained. 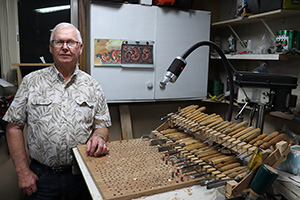 Go back to: Lowell Torkelson

"Sometimes I alternate between doing the acanthus and flat-plane carving. Pretty much stand for carving acanthus. And I sit when I'm carving flat-plane. That way you stand a couple hours then sit a couple hours. Between coffee breaks." 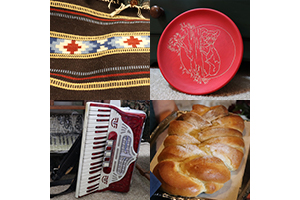 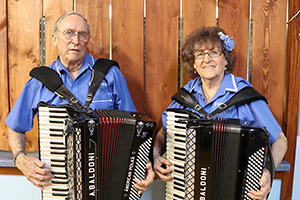 Go on to: Rod Maki and June Johnson

"For many years we played over 150 jobs a year. And I was still teaching school, I don’t know how we did it. But I think, when you’ve got music and rhythm in your system or something, it just kind of works."